Membership of Terang & District Historical Society Inc. is open to anyone interested in the history of Terang and District. 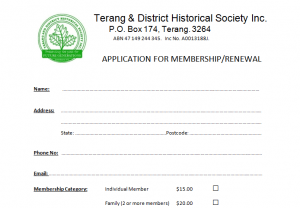 Another of our Terang Icon's gone. RIP Dan.When Dan O’Keeffe was six-months-old his parents took him to the Noorat Show. The year was 1932 and it was the first show ever held. Every year since then, one face, the same face has been a constant on show day. It was Dan’s. We did not know it at the time, but the 88th Noorat Show held in November last year was Dan’s last. He passed away peacefully on Thursday morning.

We’ve been wondering if there was one thing that Dan loved most about the show. After much head scratching and chatting about the 50-something years he served on the committee, the volumes of Member’s Tickets he sold and the time he spent as a steward in the horse rings, the answer was simply the social side of things. He just loved the social side of the show.

While we are navigating an uncertain time in history, there is still much to be grateful for. And we are certainly grateful for Dan's lifelong support. Thank you Dan. You will forever be a part of the rich history of the Noorat Show and your story, a story of dedication and good humour, will live on in folklore. 📷 Dan at his 80th Noorat Show. Taken by the Warrnambool Standard. ... See MoreSee Less